The main feature satellite operators highlight about their imagery is resolution; however, this is not the only feature to consider. Accuracy also plays a key role in determining image quality, and it’s important to understand the difference between resolution and accuracy. High-resolution is often associated with high-accuracy (and vice versa), but this is not always the case. This distinction is important to consider when purchasing satellite imagery.

Resolution refers to the smallest size an object or detail can be represented in an image. Higher resolution means that pixel sizes are smaller, providing more detail. For example, 30cm resolution satellite imagery can capture details on the ground that are greater than or equal to 30cm by 30cm. Anything on the ground that is less than that size will be blended with the surrounding area to make a 30cm by 30cm square. Based on this definition, 30cm resolution imagery would capture more photographic details than 1m resolution imagery. 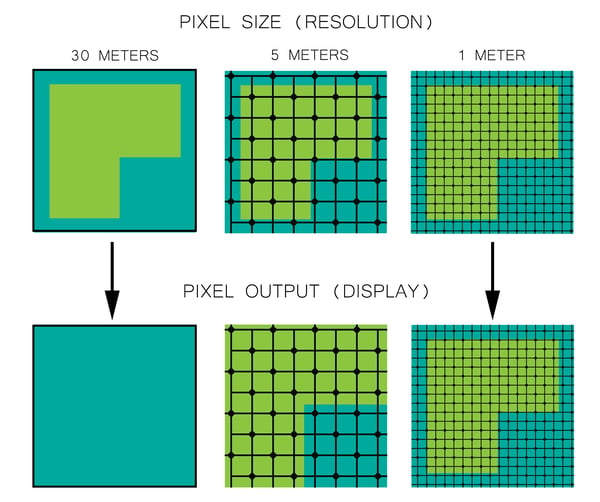 The more pixels an image has, the more detailed it is. Accuracy, on the other hand, is the distance between the actual geographic location of an object or detail compared to the position of the object in the image. Accuracy is dependent on several factors, such as the satellite positioning technology, terrain relief, and sensor viewing angle. The accuracy of an image has no direct relationship with resolution and it’s less commonly (and less clearly) specified than an image’s resolution.

The table below shows a comparison of resolution and accuracy for some of the satellite imagery sources available on the market today.

The reported accuracy for a sensor is based on two assumptions. The first is that the sensor on the satellite is looking straight down (nadir) at the earth. The second is that the topography is flat. In general, satellite images cover a wide area, so pixels at the edge of the scene will have an angled look (not nadir). This causes geometric distortions compared to the parts of the scene that are closer to nadir. These pixels on the edge will have lower accuracy than what is stated for the overall image. Additionally, any variation in the topography will magnify this geometric distortion effect, further reducing the accuracy of the image.

Accuracy can be improved after a satellite image is taken. A process called orthorectification corrects inaccuracies in the form of feature displacement and inconsistent scaling caused by sensor orientation, topographical variation, and the curvature of the earth. Once imagery is orthorectified, it can be used for feature extraction and direct measurement.

We at Intermap Technologies® are passionate about geospatial technology and applications. We work with numerous industries and process data to provide location-based answers. This blog series will highlight how geospatial data processing plays an important role in imagery applications.

END_OF_DOCUMENT_TOKEN_TO_BE_REPLACED

How to Choose the Best Ground Control Points

END_OF_DOCUMENT_TOKEN_TO_BE_REPLACED

How to Improve Satellite Image Accuracy