Digital elevation models (DEMs) are useful planning tools for a variety of industries, including telecommunications, energy, insurance, and construction. And, with the many global imaging companies on the market, there have never been more choices for your project. But how do you choose which one is right for you?

Let’s start by defining the terms. Keep in mind, the following are somewhat generic definitions and can vary from company to company, as well as by country. These are the definitions we use at Intermap which follow Maune1.

Digital Elevation Model (DEM): 3D model of a surface (usually the Earth) stored in a regularly-spaced grid of elevation values. It is a raster, similar to a digital image, but instead of each pixel consisting of a color, each pixel is an elevation.

Digital Surface Model (DSM): A DSM is a DEM where the elevations include all of the features on the surface, such as buildings and trees. Of all of the DEMS, this is the easiest to create. Only obvious anomalies must be removed.

Digital Terrain Model (DTM): A DTM shows the ground surface with the features (like trees and buildings) removed. DTMs require classification of ground features and, thus, is only as good as the land classification set used.

Digital Height Model (DHM): The DTM, also known as a canopy height model (CHM) or height above ground (HAG), shows the height of objects above local ground level. It is the difference between DSM and DTM.

Resolution: Resolution is determined by the platform used to sense the surface. Specifically, it is the minimum distance between two objects for them to be resolved as two distinct objects. Using satellite radar, for example, you may be able to sense with a resolution of 30 meters – meaning that if you have two objects only 10 meters apart, they will appear as one object. A DEM with 30-meter resolution can be resampled to 10 meters, which will give you a pixel size of 10 meters, but the resolution remains 30 meters.

Pixel Size: The resolution of an image is dependent on the size of the pixel used to create the image. A pixel is a block of color or shade of black and white. When the pixels are combined, they form an image. Whereas satellite imagery pixels may be defined by the footprint of the earth they are imaging (such as 15 m x 15 m or 225 m2), for DEMs they are typically described by post width and height or post distance.

Grid/Post Spacing: Height data is stored in raster format. As such, to define the horizontal raster grid, the following specifications are needed: 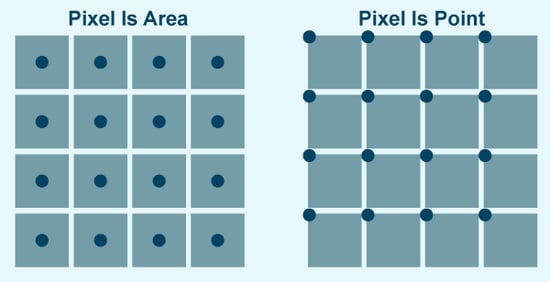 Height data is recorded for each “post” point. It is important to understand whether the grid is defined using “pixel is area” or “pixel is point” because this can dramatically change height reporting, depending on the resolution of the grid.

Accuracies: One of the most important specifications you may deal with during your selection process is accuracy. Unfortunately, there are no accuracy standards for DEM data, and there are many approaches for accuracy measurement – making the process of judging accuracy fairly daunting. Because this is such a complicated and important topic, we are devoting our next blog post entirely to this topic.

Selecting the Right DEM for Your Needs

The number of DEM choices available can be quite intimidating, although most stem from just a few sources of satellite imagery. The difference between them lies mostly in the quality and quantity of processing involved.

Part of your selection criteria must, therefore, include your own level of technical prowess. Many of the free DEM sources require at least some level of GIS expertise. Some of the pricier packages are point-and-click, allowing even novice users to retrieve useful information quickly and easily.

Another important consideration is what you are using the data for. For instance, the telecommunications industry relies heavily on DSMs and DHMs for backhaul and link planning, whereas environmental engineers focus more on DTMs which provide them with an understanding of ground structure and watershed.

Finally, you must also consider resolution and accuracy – together known as precision – required for your application. General planning and academic purposes can generally use the free DEMs on the market. Engineering and planning efforts require more precise data, which generally involves a higher cost. Finally, detailed planning (such as bridge building) requires extremely precise elevation data which is typically only available through custom, airborne collection.