DENVER – February 22, 2018 (TSX: IMP) (ITMSF:BB) – Intermap Technologies Corporation (“Intermap” or the “Company”) reported a 174% increase in 2017 revenue and a $11.6 million improvement in cash from operations, compared to 2016. In addition, it reported positive net income for the fourth quarter.

The Company also announced today the receipt of a new $2.0 million government task order for the creation of digital elevation and bare earth terrain models. The Company is increasingly providing its multi-sensor solutions and data management tools through web services, software and analytics. Including this announcement, the Company has announced $3.7 million of government task orders since year end 2017, which are to be completed in 2018.

“These results reflect across-the-board growth in geospatial content, software and solutions, delivered where, when, and how they are needed. Intermap serves better analytics and answers to both our government and commercial customers all over the globe,” commented Patrick Blott, Chairman & CEO of Intermap. “We will continue investing strategically in our people, technology, proprietary data, and client relationships, to deliver cutting-edge geospatial solutions that are responsive and financial returns that are competitive.”

All amounts in this news release are in United States dollars, unless otherwise noted.

The Company finished the year with $6.4 million of cash and positive working capital of $0.3 million, compared to cash of $6.5 million and a working capital deficit of $3.8 million for 2016.

In addition to generating cash throughout the year, the Company invested $3.9 million in new sensors, software, and other proprietary technologies, compared to $0.3 million of investment during 2016. Total assets increased to $11.8 million, up from $9.0 million at the end of 2016. The Company’s total assets exclude its proprietary, high resolution, NEXTMap® data library, as well as internally developed software applications, patented algorithms along with innovative approaches in artificial intelligence and machine learning-driven processing engines, risk models, and prototype sensors. Cumulative net operating loss carryforwards at the end of 2017 totaled $223 million.

Additional highlights of significant milestones achieved in 2017 include:

The Company’s Annual General and Special Meeting of Shareholders is scheduled for March 15, 2018 in Calgary, Alberta. The materials are available on SEDAR at: www.sedar.com. In advance of the meeting, the Company has entered into a voting agreement with Vertex One Asset Management (“Vertex”), in which Vertex intends to support the matters to be put before shareholders at the meeting.

The Company’s consolidated financial statements and management’s discussion and analysis will be filed on SEDAR at: www.sedar.com. Important factors, including those discussed in the Company’s regulatory filings (www.sedar.com) could cause actual results to differ from the Company’s expectations and those differences may be material.

Adjusted EBITDA is not a recognized performance measure under IFRS and does not have a standardized meaning prescribed by IFRS. The term EBITDA consists of net income (loss) and excludes interest, taxes, depreciation, and amortization. Adjusted EBITDA is included as a supplemental disclosure because management believes that such measurement provides a better assessment of the Company’s operations on a continuing basis by eliminating certain non-cash charges and charges that are nonrecurring. The most directly comparable measure to adjusted EBITDA calculated in accordance with IFRS is net income (loss). 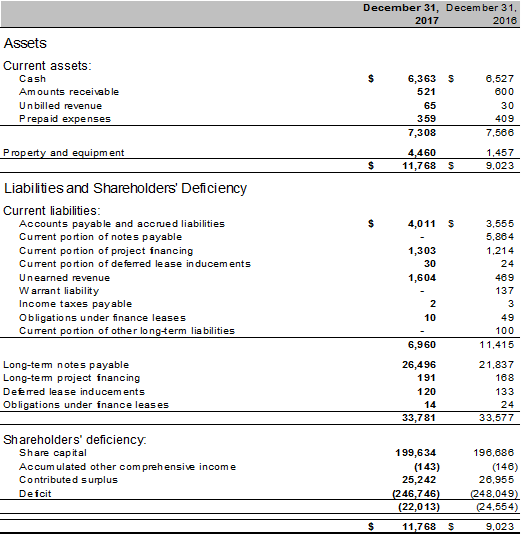 Consolidated Statements of Profit and Loss and Other Comprehensive Income

(In thousands of United States dollars, except per share information) 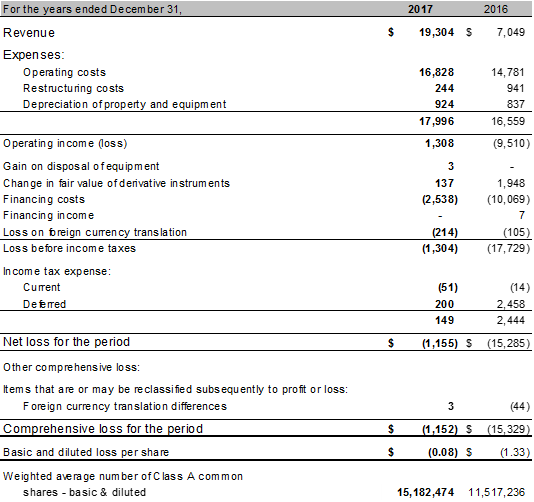 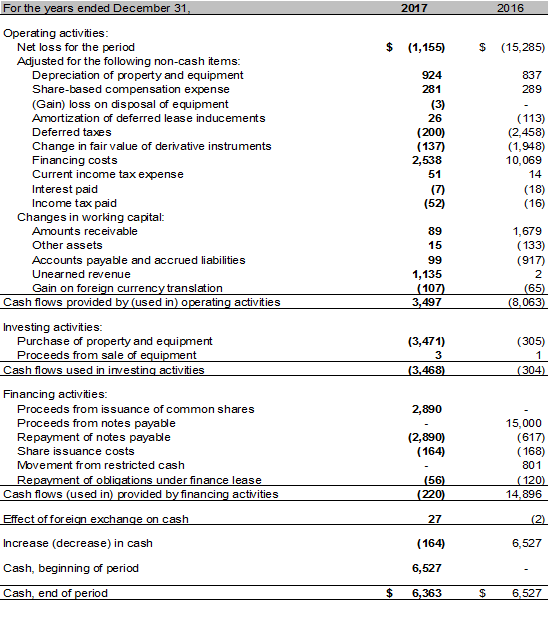