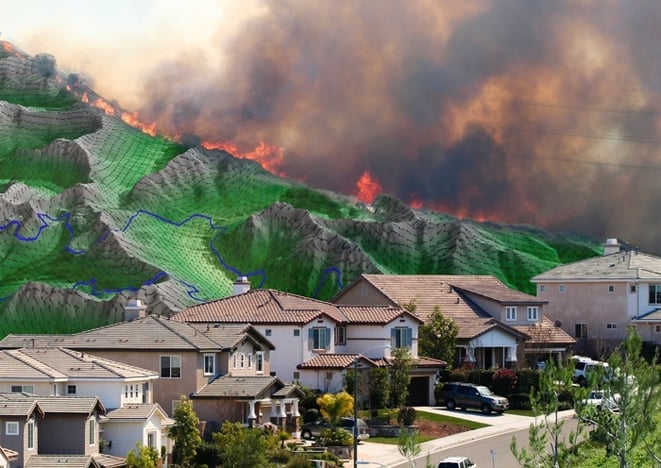 Even in a year that is already infamous for US catastrophes, the Thomas Fire of December in the dry windswept hills north of Los Angeles was a staggering event. Ignited near Thomas Aquinas College southeast of Ojai on Route 150 (thus, the name!), it burned hard and it moved quickly with 50+ mph winds. After the wet spring (floods!), there was ample new fuel for fires, and the dry and breezy conditions drove risk levels to unprecedented heights. Sure enough, an unprecedented fire happened.

With loss information now available for the fire, underwriters can cross-reference their wildfire analytics and maps with where the damage was done. Here is a sneak preview of what they will find.

The first observation is that Ojai mostly avoided damage. The wildfire started just up the valley, but the fire perimeter stayed out of the built-up parts of town. Individual properties lost in Ojai were insignificant for this fire (but significant for the homeowners and neighbors, of course!). There must have been concerted suppression efforts protecting Ojai in December.

The damage from the Thomas Fire was concentrated around the built-up areas of greater Ventura where it abuts the hilly wildland to the north and east. Hundreds of homes were lost in that region. The fire at that time was moving before a very strong Santa Ana, and there was probably little that could be done in time for those communities beyond evacuation and lifesaving.

For underwriters, the key observation is that almost all the homes appear to have been destroyed by embers. Only a small portion of the lost homes were next to the wildland where the flames came down from the hills. Further, it appears that there was significant home-to-home ignition. Once embers ignited a home, those around it were exposed and were frequently burnt.

The ember zones are the most important aspect for underwriting property. Again and again, it is embers that transform small losses to catastrophic losses with accumulation impacts. It is essential that embers are taken into consideration when underwriting wildfire risk.

Here at Intermap, we were able to validate the Anchor Point No-HARM wildfire model used in InsitePro using Thomas Fire losses. The correlation of losses in the Ember Zones was more than encouraging – it was amazing. To learn more, contact us below. 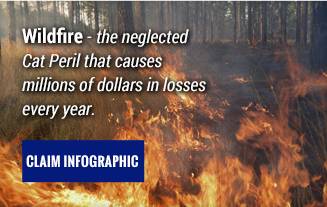