Intermap has partnered with Anchor Point, a wildfire mitigation specialist based in Boulder, Colorado, to offer its No-HARM wildfire model to InsitePro subscribers. In today's blog post, I asked Anchor Point COO Chris White to discuss the advantages of No-HARM over publicly available wildfire models.

When a property insurer underwrites a specific natural peril, one of the first things they need to do is identify a model to use for determining the risk at the locations they will quote. That hunt almost always starts with Google searches of government organizations that might have a model available for use. For those underwriting flood outside the USA, there are flood models published by local and regional governments. Meanwhile, those underwriting flood within the USA of course have the flood insurance rate maps (FIRMs) published by FEMA. For those underwriting wildfire in the USA, the search might start with HAZUS from FEMA (although they don’t have wildfire module) and end with the U.S. Forest Service (USFS).

Federally produced hazard maps are publicly available. They were built to help federal agencies manage the country’s timber inventory, but are widely used beyond forest management. Urban planners have found some value in the modeling when planning development in or near federal lands, and organizations with widespread infrastructure (railroads, highways, pipelines, etc.) may manage fire suppression resources with it.  Insurers may even underwrite with it. However, the federal modeling was not really made for any of these applications.

Meanwhile, the No-HARM wildfire map from Anchor Point is built for these more specialized uses, including underwriting wildfire risk. No-HARM (National Hazard and Risk Model) is a unique wildfire model that describes both the risk of wildfire occurring at a location and the likely severity of the wildfire once it’s burning. For property insurers, these are important facets of wildfire to know. They are analogous to “flood zone” and “flood depth” in flood models — they provide an annual chance of damage, as well as the likely damage should an event happen.

No-HARM begins with the same publicly available ecological and terrain information from the federal government, but goes much further. No-HARM corrects the inherent deficiencies known in the fire modeling, converts the outputs to be meaningful for underwriting instead of ecological issues, and incorporates man-made aspects to the mix, including distances to fire-stations and private land information (parcel size and concentration). Road networks are included and accounted for because the presence and layout of roads contributes to the risk (after all, people start more than half of all wildfires) and the ability of suppression crews to stop them. Most importantly for insurers, No-HARM models the wildland urban interface (WUI, pronounced “woo-ee”), at the very edge of urban areas where most structure loss occurs. This is the ember zone where wildfire directly impacts property, and risk is modeled for burning due to direct contact with flames as well as airborne embers.

Unlike anything available in the public domain, No-HARM is a wildfire model built purposely for insurance and is able to handle underwriting specific locations. No-HARM is available with InsitePro at an additional subscription cost. Learn more. 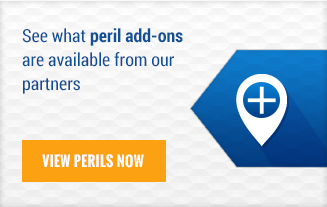