Disruption within Property Insurance & the Nat Cat Way of Things

“An ambitious amateur will rise above a complacent master.”
― Matshona Dhliwayo

Last month I watched a webinar from Advisen Ltd. titled Natural and Man-Made Catastrophes in 2015 - Calm Before the Storm? Swiss-Re was the sponsor, and it featured analysis by two distinguished gentlemen: Thomas Holzheu, Chief Economist Americas from Swiss Re, and Robert Hartwig, President of Insurance Information Institute. If 26,000 casualties last year aren’t enough, there is some fascinating loss information and some frightening predictions if we assume that status quo continues to be the norm.

Mr. Holzheu started the webinar with results from Sigma, which is a long-term study of Cat losses globally. Some of the most salient points included:

I’m not sure who was keeping track of weather statistics back in the mid 1800’s, but thanks. Note the insured losses in both 2014 and 2015 compared to the 10 year average - very low. Mr. Holzheu then discusses the Protection Gap (the difference between insured and uninsured losses) which has been widening steadily for the past 40 years, and is currently the largest gap ever. The largest portions of the gap are Quake (90%) and Flood (86%). Intermap’s product manager Ivan Maddox shared his thoughts about the Protection Gap earlier this year.

Robert Hartwig starts his portion around 22:42 of the webinar and delves into his thoughts on the economics surrounding the Sigma results:

So What’s Next ?
The status quo won’t be enough, because we can already see changes. Just last year Hurricane Patricia became the strongest hurricane on record. It struck the sparsely populated western coast of Mexico. But what if it had gone north and struck San Diego? Will there be an El Niño to La Niña climate shift this year? What do NOAA predictions for 2016 look like, and do they mean anything?

Thanks again to Advisen, Swiss Re, Mr. Holzheu, and Mr. Hartwig for their enlightening dialog and graphical presentation of catastrophic losses impact the insurance vertical, and how important it is that underwriters prepare for them. 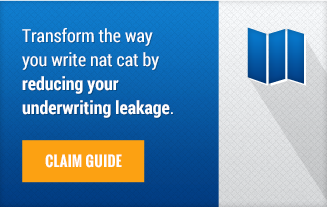